Meeting the man behind my miracle 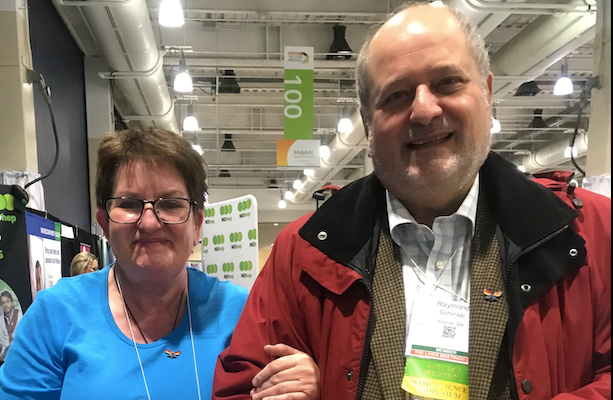 Meeting the man behind my miracle.

November 2019 found me in a conference hall in Boston. I was tired, I had come to the end of three days on an NGO stand at the biggest liver conference in the world. Almost time to pack up. I was there promoting our new global symbol for the highly stigmatised virus, the Hep C butterfly.

As we had found everywhere in the world, I’d had overwhelming support, thousands of ‘feel good’ butterfly items taken and endorsements of it as the global symbol signed. It was on the lapels of most of  the eminent clinicians there. It really happened, the #hepcbutterfly has become like the daffodil is for cancer. People walk towards it and the stigma is gone. They talk, ask questions and it leads to treatment.

Many smiles and selfies later. I had travelled from New Zealand and done the conference alone, I was almost talked out. One more person approached, smiling in advance, as so many did at the stall. I had seen thousands of faces but this face…it was one of those frozen moments, searching my mind because I knew this was significant. I’m glad to say it came quickly,          and the conference lanyard came in handy to confirm.

I realised it was the man to whom I owed my life. The legendary virologist who invented the world’s first, and only cure for a virus. I thought about all the people I knew… actually the millions of us who would not be alive now but for his ground breaking work. Breakthroughs not ‘just’ for Hep C; but Hep B and HIV as well. One of the scientists of the century.

I was looking around asking stall holders, do you realise who this is? https://en.wikipedia.org/wiki/Raymond_F._Schinazi

I’m not easily overwhelmed but it was a big moment. We talked, he was happy to endorse our symbol for the virus he cured. He wanted to know how I felt, what the difference was for me, he is a researcher and does not speak to many people like me, a survivor thanks to sofosbuvir.

I was able to tell him- I was at death’s door. My liver was failing and I had Hep C all my adult life. Your miracle drug arrived just in time, I am twice the person I was before and have since completed a law degree. I was able to tell him of the thousands of survivors I am connected to on social media and thank him for us all.

In these new extraordinary times, conferences like this are now impossible. We swapped contacts, and have kept in touch a little. The man behind my miracle continues to work on viral solutions and I keep using my new life to give others the news about the cure. This moment captured is one I won’t forget. There are even more challenges to be met in global health now, and thanks to Professor Schinazi, I have work to do.